Lets take a trip down piston history road.
Over 100 years of automotive engineering are in these photographs today. Oddly enough we just happen to have some engines in the shop now that represent the start of the auto engine, mid century and modern day. (Model T, Jag XK120, and GM LS7).
All three of these engine share close to a 4.000" stroke (Model T and LS7 are both 4") while the Jag has a slightly longer 4.17" stroke so the c/h is about the same on all. Model T of course is a flat head while the others are over head valve.

Look at the massive difference in not only rings, but ring placement. The Model T is using a three ring stack like we see today but massive 0.25 thick steel rings placed on top and bottom of the wrist pin. By the late 40's and early 50's they had realized ring friction matters and had started to move the rings higher on the pistons and drastically cut down on size as well as tension. Modern pistons are now close to 1mm on production cars with race engines well under 0.7mm 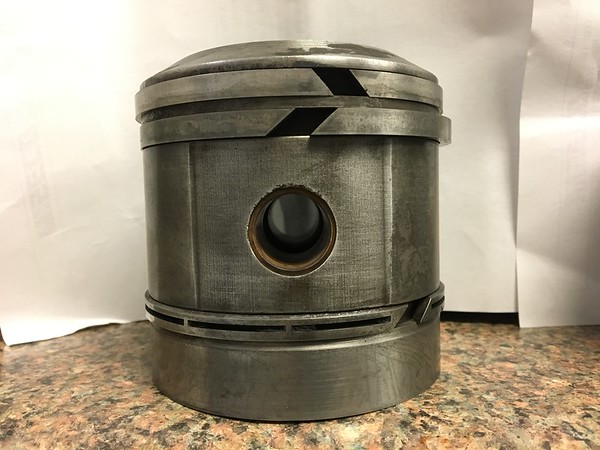 The massive Model T piston comes in as the heavy weight, made of steel with super thick rings.  Compression, 4:1

Jag XK120 piston shows a more normal set of rings, and has more than doubled the compression of just 30-40 years prior of the Model T.
Materials have also changed as well well know. The Model T is a STEEL piston weighing in at a massive 950grams. Moving mid century everyone had seen that going to aluminum was the way to go and weights dropped into the 500 gram range, 1/2 of what they were starting out. Modern pistons are still cutting back on weight and will typically range 440-500 grams depending on application and size of course. Aftermarket pistons, even for the LS7 size can drop to 400 or below.

Even used, the LS7 looks like something from the space age compared to pistons just 40 years ago.  11:1 compression, 1.0/1.0/2.0mm ring pack combined is less than the top ring of the Model T piston.
One could write an entire volume of books on changes in pins, pin location, skirt design, crown, material, ring, ring placement....but it is very eye opening to put over 100 years of pistons together to see, visually the changes.
Share
Share on Facebook Tweet on Twitter Pin on Pinterest
Back to News