A key component in any build is going to be the crankshaft. Many think cranks are cranks. You have cast and forged....stock and stroker, but there is far more to it than that. Given no one makes a crank in this stroke for the LS engine, it had to be a custom billet piece no matter what we did. Callies, Windberg, and Bryant Racing all provide services to build one off or small runs. Given we have worked with all of these in the past, we felt Bryant Racing to be the best at what they do on custom units like this. 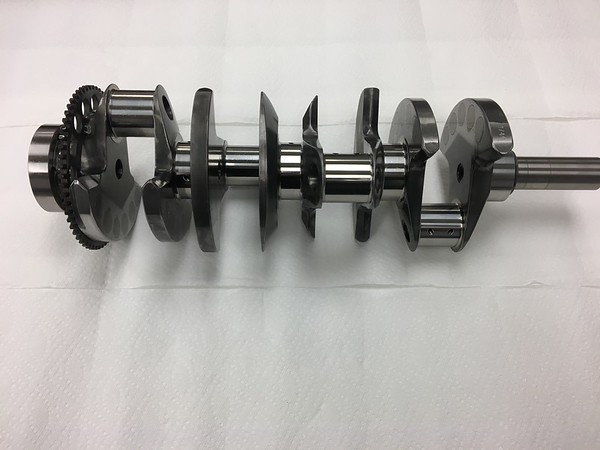 
Now you might notice a few things on this one in that it looks a bit different than your standard LS crank, apart from the bigger than stock stroke. It has more than 6 counter weights for one. This is a 8 counter weight, or center counter weighted (ccw) crankshaft, being that every pair of rods now has a counter weight to balance it out. These are going to be heavier than your normal forging but offer a number of benefits from a stronger crank to one that has far less natural harmonics in it to shake the engine. We typically use these on any of our forced induction builds making over 1000whp, or any engine that is going to be turning higher RPM's for a longer period of time. That isn't to say it is the only reason as cranks such as these tend to flex less and offer longer main bearing life than their 6 counter weight brothers. Given our drag setup might see north of 8000 RPM and over 1000hp, again it made it a logical choice to go this route.

A second thing someone that has been around this might notice is the number of pieces of heavy metal. Bryant spends a lot of time designing the crank to offer the best way to keep the crank strong and fan height for the counter weight to offer natural harmonic damping. That being said we are using a relative light rod and light piston in these engines so bob weights are even lighter than what you would find in our 468 builds by 10-20 grams and lighter than more normal forged 416 build by more than that. That all being said a number of pieces of Mallory were needed to bring the crank into balance. Those working up a rough $ in your head, there is more cost in the heavy metal in one of these cranks than a stock LS7 crank is new. :eek:

For now we are using a custom Callies forged H beam rod with a few changes to it. Moving forward, HPR 527's are going to have our own connecting rods built for it as we have found a number of ways to improve upon the design, and take some weight out of the rotating assembly while maintaining strength. 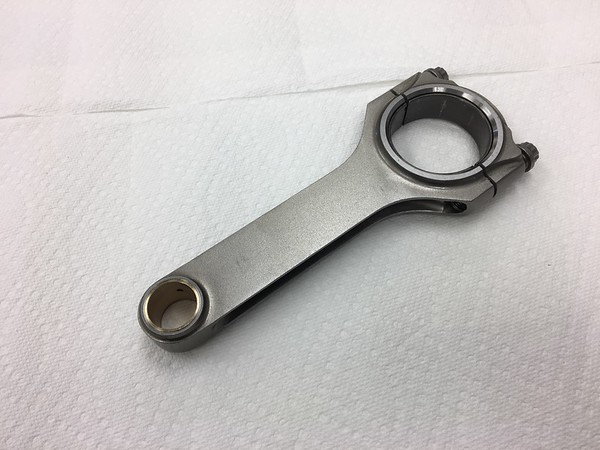 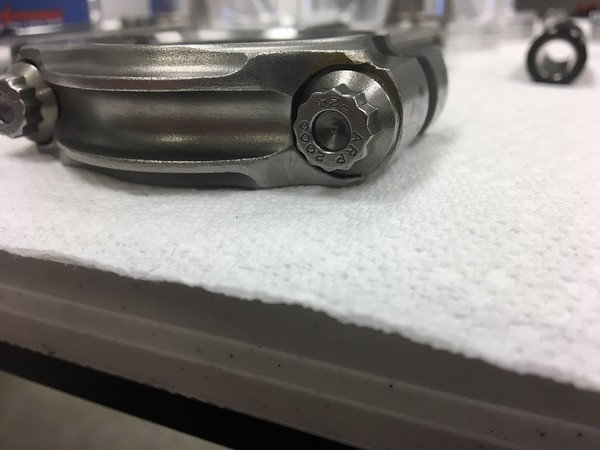 
What you have seen so far will be included in any 527 as the crankshaft and rod combo will be the same in all of them. Pistons however, we do have a few options and every customer engine will have pistons spec'd to his/her needs and application. This pair will be using Wiseco for the drag engine and CP for the street/strip combo. Each piston was done to our specs and designed by Erik and each respective company. 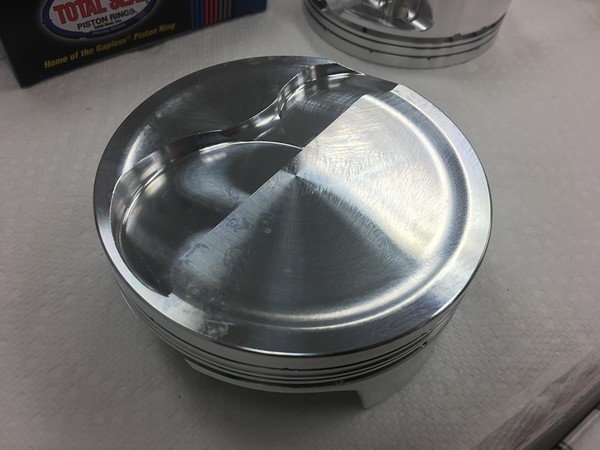 With the CP piston we did a number of things to strengthen and lighten the piston both at the same time. As in 99% of our builds it is a 2618 forging material, but we decided to do a strutted piston with a number of CNC lightening features to bring these in under 400 grams. By comparison the OE LS7 piston is 483 grams and most flat top forged aftermarket pistons are going to be north of 440 grams! A slight dish on these will allow us to bring the compression under 12.2:1 for normal pump gas mixed use that this will see. 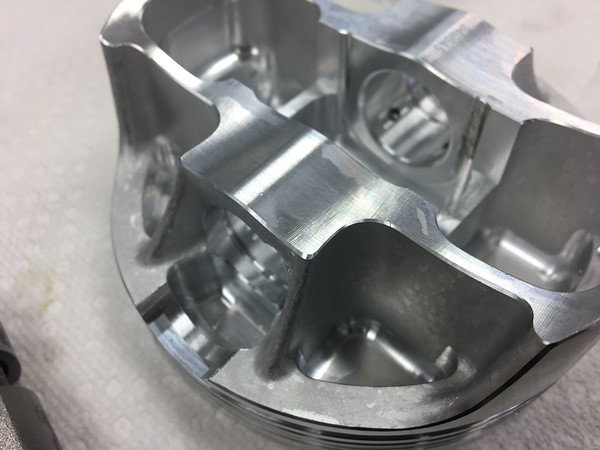 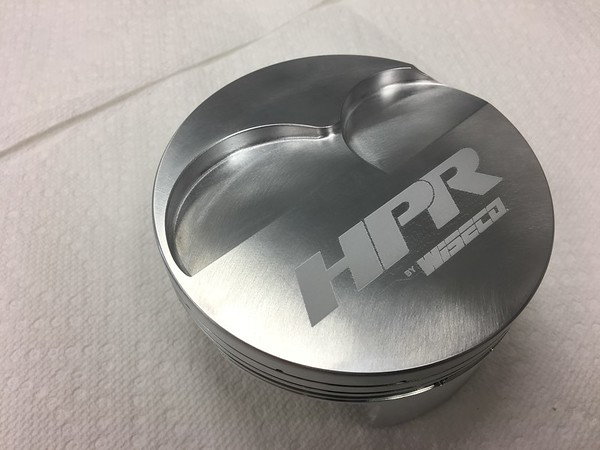 Wiseco's pistons are also a 2618 like all of their professional series pistons that we use. Unlike the CP piston this is a normal flat top design with the correct valve reliefs needed for over 1.000" of valve lift and the CID cylinder head valve location. Being the CID heads offer a rather small chamber size a dome was not needed to reach our desired compression which is north of 13.5:1 on this build. 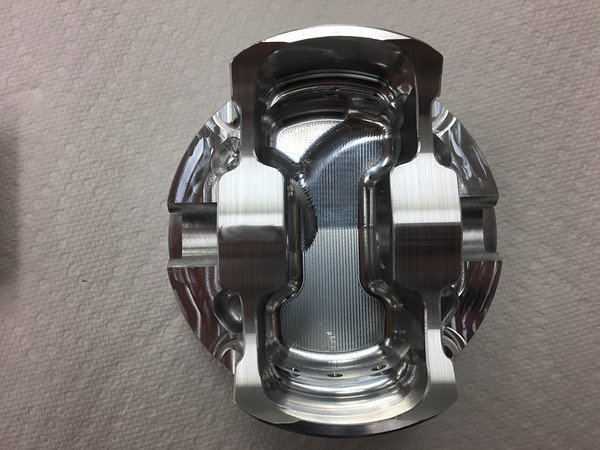 Under side featuring full under head milling

You can sell the full under head mill on the Wiseco piston above. Again, all done in the name of weight and balance. 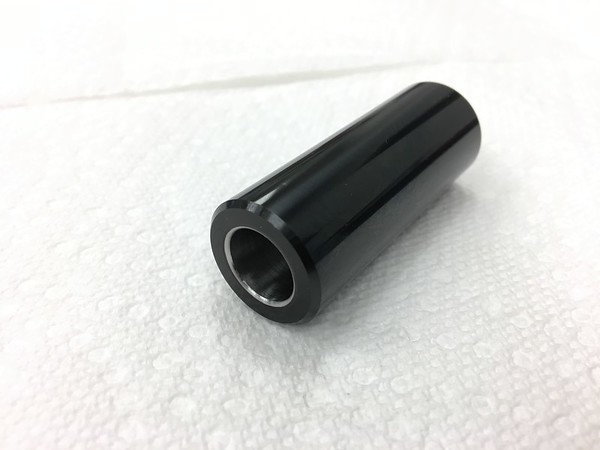 
Both engines are running a rather thick walled piston pin, to control deflection of the piston at the small end of the rod. On the CP pistons, since it is more of a boxed design which will block some of the oil splashing up to the pin we added a bit of safety by going to a DLC coating on these. The DLC will help prevent the pin from galling to the rod bushing or the piston itself in the event there is lack of, or reduced oil flow to the pin. The Wiseco pin, is the same size, but un-coated since the piston is open on the bottom side and will have more than enough oil feeding to it. You might ask, why not do it on all engines? Well the DLC coated pins are typically 1.5 to 2x the cost of your normal tool steel pin which is already double what a typical pin is going to be. So it boils down to a costs vs benefit deal.

In most of our custom piston designs we like to use a Total Seal Ring pack (not the gap less rings) because of their ability to provide us a number of custom features, sizes, and tensions. Following along in the trend of racers as well as the high performance OE designs we are running a smaller ring package. Top and second rings are slightly thinner than 1mm with a 2mm oil ring pack as you would find similarly in a OE LS7 package. Controlling skirt design, piston to wall, and ring tension we can do this and still have excellent sealing and oil control with these big engines, just as GM was able to do with the LS7 using a thin ring stack. 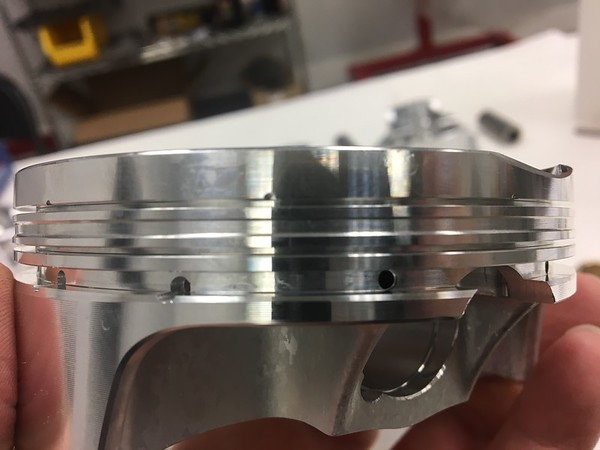 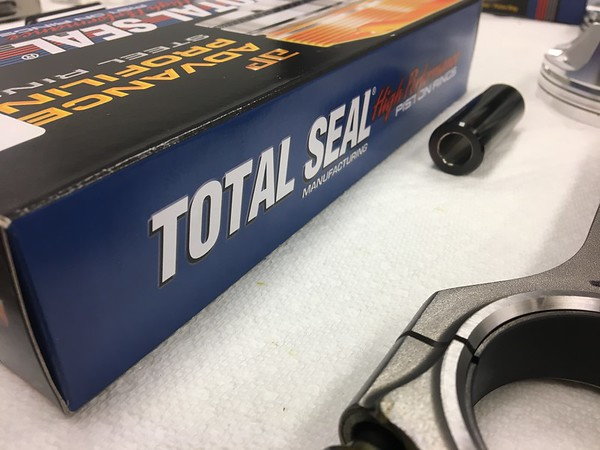 Main and rod bearings were covered by Federal Mogul, and were coated for added protection.